Twitter RSS Feed
← Frog Redemption: A Second Chance
Don’t You Dare Be Sick of It → 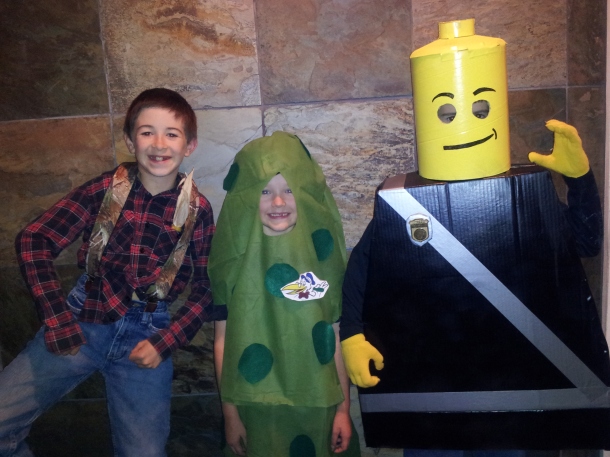 The best opening line of a joke EVER

So, a hillbilly, a pickle and a Lego man walk into a bar…….

Isn’t that the BEST set-up for a joke? It’s been crackin’ me up all week. And I don’t even have a punch line! (And technically, it’s a Lego mini-fig, but that just doesn’t roll off the tongue the same way…..)

But yesterday was one of those magical moments when the parenting stars align. When it doesn’t matter how NOT artsy or craftsy I am, or how much laundry didn’t get folded this week, or how grouchy I or may not have been the day before.

What mattered yesterday was the fact that my sweet husband and I (with an assist from the teenager) pulled off some serious Halloween 2012 Costume Victory. Three boys, three costumes that actually resembled what they were supposed to resemble.

The nature of the victory? The usual. No contests were entered, no medals awarded. Honestly, the three costume recipients weren’t even effusively grateful. But when for even a brief moment I feel like I’m doing this parenting thing right, I claim that little victory!

Another Halloween has come and gone, and I am keenly aware that I don’t have many years left to enthusiastically craft poor quality costumes, or supervise candy sorting and trading, or scrape sugared-up little boys off the ceiling and pour them exhausted into bed and kiss their sticky cheeks. So forgive me, but I’m going to sit back and savor this for a spell. Pass the Reese’s Cups, would you? 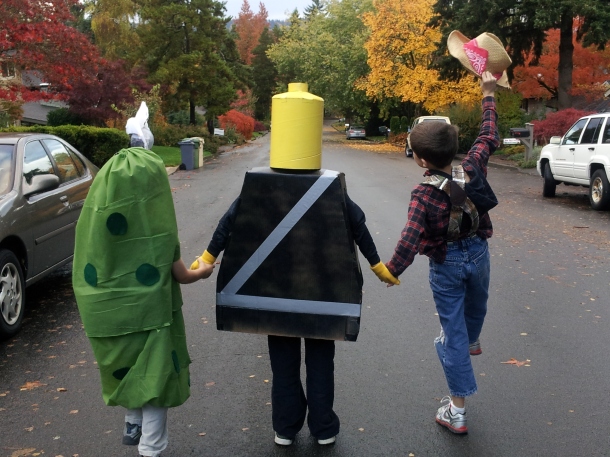 Posted in Uncategorized and tagged Family, family adventures, fun, Halloween, parenting. Bookmark the permalink.
← Frog Redemption: A Second Chance
Don’t You Dare Be Sick of It →